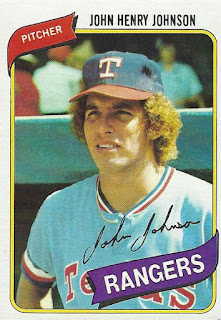 John Henry Johnson, shown here on card 173 of the 1980 Topps set, came to Texas from Oakland on June 1979. The A's got utility infielder Dave Chalk, minor league catcher Mike Heath, and some cash in return for the young starter.

Befitting his name, Johnson was known for his fastball. He did not disappoint in his first two appearances for the Rangers. In his first start for Texas, John Henry struck out ten Angels over five innings before leaving the game with a sore ankle. He picked up the win there and in Oakland when he made his second start. The bottom fell out from there though and Johnson ended the season 2-6 for the Rangers with a 4.92 ERA. Apparently he needed some work. Texas decided to focus on helping him develop a curve ball and changeup.

John Henry was impressive in Spring Training in 1980, but his secondary pitches still needed work. Texas assigned him to Triple A Charleston to start the season. Johnson made 11 starts for the Charlies and seemed to be continuing his troubles from the previous season. He struggled to a 4.55 ERA and a 2-8 record before the higher-ups decided a change needed to be made. John Henry moved to the bullpen and found his niche. His ERA dropped to 2.25. The improvement was enough that the Rangers called him up in early July as their bullpen crumbled.

The young lefty made 33 appearances out of the bullpen for the Rangers in the remainder of the 1980 campaign. He posted a 2.33 ERA and an 1.086 WHIP over the 38.2 innings he pitched. The fastball was still live as he struck out 44 while walking just 15. John Henry ended the season with a 2-2 record.

1980 had been a season of progress for John Henry Johnson. He appeared to have found his role as a reliever. The Rangers would be looking to the fire-balling left-hander to help solidify the bullpen in 1981. If Johnson could continue his success from the latter half of 1980, he might be able to nail down a permanent job.
Posted by Spiff at 1:36 PM