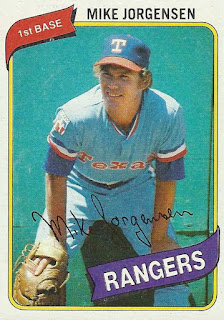 Mike Jorgensen appears here on card 213 of the 1980 Topps set. One of the victims of the early 1980's Rangers roster upheaval, he would not appear in a Rangers uniform in 1980.

Following Pat Putnam's beating Jorgensen for the first base job in 1979, the Rangers traded for Willie Montanez from the New York Mets on August 12, 1979. The Mets were to receive the ever popular players to be named later.

That left Texas with three first basemen: Putnam, Jorgensen, and Montanez. It was not a situation that could long continue but it would last through the end of the season.

On September 18th the Rangers sent Ed Lynch to New York to partially complete the trade for Montanez. On October 23rd Mike Jorgensen got his ticket to the Big Apple as the second player the Mets received for Montanez. The trade that took three and a half months to complete was finished.
Posted by Spiff at 1:34 PM