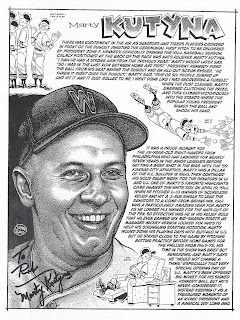 So, the through the mail returns have been coming in recently. I had three waiting when I returned from FanFest last week. One of those was from former Senators hurler Matry Kutyna.

I sent Mr. Kutyna a single 1961 Topps card on January 13th and asked him to sign and return it. My first clue that something was not normal was the fact that my card arrived back home on the 23rd in a large manila envelope, not the small self addressed envelope I included with the request.

Not only did Marty sign and return my 1961 Topps card, he added a trove of goodies to the package and paid the return postage himself. Included in the envelope was this 8x10 summary of Kutyna's career, personalized and signed by Mr. Kutyna himself. Part of the account tells the story of how Marty caught a ball thrown out on opening day by President Kennedy in 1962. JFK signed the ball after Kutyna recovered it. An 8x10 photo of Kennedy signing the ball was included. Mr. Kutyna personalized and signed that photo as well. Next came a photo-copy of a 1961 newspaper article about Marty's efforts with the Senators that year, a print out of the Wikkipedia entry about Kutyna, a print out of his career stats, and an account of his first face-off with Ted Williams.

Three autographs and a great package of information and photos. Can't beat that. It was way more than I expected. Players will occasionally include a custom card or a small note. This was far beyond that. Thanks a lot Mr. Kutyna!
Posted by Spiff at 10:00 AM