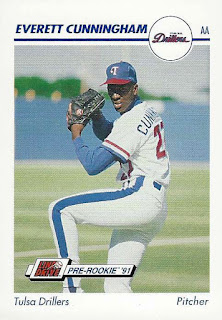 Coming into the 1990 season, Everett Cunningham was at the make or break point. A fourth round pick in the 1988 draft, Cunningham had confidence issues that slowed his climb up the minor league ladder. He finally seemed to get those bugs worked out and turned in an impressive season for Charlotte in 1989. 1990 had been a mixed bag. The first part of the season was great and earned Everett a promotion to Double A. The second half of the season was not nearly as good and ensured that he would not make the jump to Triple A going into 1991.

Apparently the Rangers decided Cunningham might do better out of the bullpen than as a starter. They moved him out of the Tulsa rotation for 1991. Everett would make 21 appearances for the Drillers, all but one in relief. He pitched 41.1 rough innings and walked 28 opposing batters while striking out just 25. His ERA climbed to a then career high 6.97 while his WHIP reached a career worst 1.790. Those numbers resulted in am 0-3 record.

The Rangers had seen enough and decided Cunningham had to go. I'm not sure if he was traded or cut. Either way he did not end the season with the Drillers. Somehow Everett ended up with the Double A Wichita Wranglers in the San Diego Padres system to finish the 1991 campaign. The 16 games he pitched out of the bullpen for Wichita went worse than his time in Tulsa. An 8.17 ERA and an 1.737 WHIP during that stint ensured that 1991 would be the last season of Everett Cunningham's pro career.
Posted by Spiff at 11:01 AM