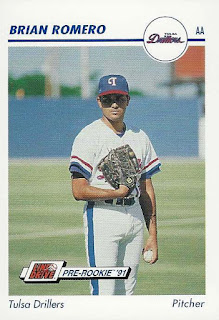 Coming off a great 1990 season, Brian Romero was trying to continue his climb up the Texas farm system ladder in 1991. Romero, shown here on card 594 of the 1991 Line Drive set, had been a pleasant surprise for a 50th round draft pick who missed his first season due to injury. He would start the 1991 season with the Double A Tulsa Drillers.

Primarily a starter, Romero saw significant relief action for the first time in his career in 1991. In the 23 games he appeared in for Tulsa, only 14 were starts. The season didn't take long to get rough. Over the 94 innings Brian pitched he posted a 4.98 ERA and a 1.532 WHIP. Both were extreme increases from 1990. The 52 walks Romero issued didn't help his cause but at least the 79 times he whiffed opposing batsmen outnumbered the free passes. Romero stayed with Tulsa for the entire season and ended the year with a 6.5 record and one save, the first (and only) of his pro career.

1991 was a rough season for Brian Romero. His impressive climb towards the Majors came to a screeching halt. At least the Rangers did not demote him. They really didn't have that kind of time for a 50th round pick, even a left-hander. Romero would make good, or he would not. Either way, he would do so at Double A. The Rangers left Brian assigned to Tulsa for the beginning of the 1992 season. Time to pull it back together.
Posted by Spiff at 11:31 AM