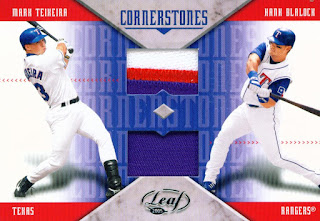 Lots of random today, starting off with this random Rangers game-used 2005 Leaf Cornerstones card #CM6. The card is numbered 25/50 and supposedly features swatches from the uniforms of then Rangers Mark Teixeira and Hank Blalock. I have to admit, I do like the tri-color piece for Tex.

The Rangers have seven players who filed for arbitration. Normally Texas does not get to the hearing process with any of their players but there are one or two I might be tempted to try it with this go round. The list of Rangers filing includes Shawn Tolleson, Jurickson Profar, Jake Diekman, Tanner Scheppers, Tom Wilhelmsen, Mitch Moreland, and Robinson Chirinos.

How Profar can expect his salary to do anything other than go down is a mystery to me. Tolleson, Moreland, Diekman, and Chirinos probably deserve raises. Scheppers was pretty bad last season. Not sure how Wilhelmsen stacks up. Regardless, the Rangers will likely try hard to reach agreements with all these players before the arbitration. The last player they went to arbitration with was Lee Stevens in 2000.

Texas pitchers and catchers report on February 18th. The whole squad is due in Surprise on February 24th. Baseball is just around the proverbial corner. Wahoo! Strat-O-Matic is a great game but it doesn't really replace the real deal during the long winter months. I am ready for some baseball.

Speaking of getting ready, Spiff Jr and I are dusting off the sharpies and getting ready for Rangers FanFest 2015 on January 23rd. So far I haven't seen a listing of the players appearing but, if the past two years are any indication, it should be a great list of guys. This will be our third year going out to the ballpark for the FanFest and it's becoming a tradition. If you are planning on attending and want to meet up, let me know.

Closer than the FanFest, tomorrow actually, is the eighth anniversary of Texas Rangers Cards. I started this blog on January 15, 2008. Eight years later I'm still learning and having a great time. I enjoy every comment and all the support the readers of the blog have given over the years. Hope you will continue to hang around and I look forward to sharing more Rangers cards with you.
Posted by Spiff at 10:02 AM