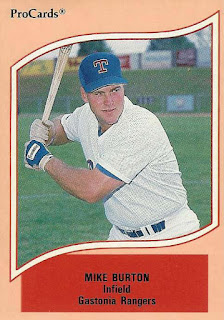 Mike began his pro career in 1989 with the Rookie League GCL Rangers. In 1990 he played for Single A Gastonia, as shown here on card 99 of the 1991 ProCards set. He would be assigned to Double A Tulsa for the 1991 season.

Burton appeared in a total of 106 games for Tulsa in 1991 and logged 423 plate appearances. He tallied a .241 batting average and a .344 on-base percentage. While his 56 walks certainly helped with the on-base percentage, his 88 strikeouts did little to help his cause. Scoring 43 runs, Mike was responsible for 49 RBI. He hammered 18 doubles, two triples, and seven home runs during the course of the season.

The front of Burton's card makes it appear as if he played several infield positions. Not so in 1991. All of the 105 games he played in the field for Tulsa that year were at first base. Mike made an astounding 11 errors during the season to drop his fielding percentage to. 989.

1991 was the year Mike Burton's pro career hit a snag. He saw his batting average, on-base percentage, and power at the plate drop. He also struck out more times than in almost thirty games more the previous season. Additionally, his glove seemed to have turned to cement as he committed almost as many errors in one campaign for Tulsa as in the previous two seasons combined.

These were not numbers to warrant a promotion. What they did do was put Mike on the Rangers radar, and not in a good way. Even though he improved his draft spot by not signing the first time around, Texas still expected quick improvement from their young first baseman. This was not quick improvement.
Posted by Spiff at 10:17 AM