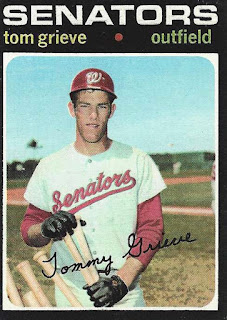 Tom Grieve, shown here on card 167 of the 1971 Topps set, missed the franchise's last season in Washington. After taking a look at Grieve in 1970, the club decided to leave their 1966 1st round pick in the minors for more seasoning in 1971. He would not make it back to the Majors until 1972.

Grieve appeared in 93 games for the Triple A Denver Bears in 1971 and made 364 trips to the plate. He put up a .272 batting average and a .365 on-base percentage. Perhaps most eye-catching to the power-starved Senators was the fact that he hit 14 doubles, five triples, and 19 home runs. That came with an 81 strikeout price tag but sluggers always strike out a lot. What remained to be seen was how much of that power was the result of the thin Denver air and how much would translate to the Majors. Tom worked 37 walks as well. He scored 64 runs and bumped in 61 RBI.

Grieve played in the outfield in 85 of the games he played in for Denver. In the course of the season he committed three errors to end up with a .984 fielding percentage.

While Tom Grieve hadn't blown the doors off at Triple A, he had put up a good season. Good enough to warrant a return to the Bigs in 1972, this time as a Texas Ranger. Starting then, he would have to be good enough to win a full-time job in the Rangers outfield.
Posted by Spiff at 9:30 AM