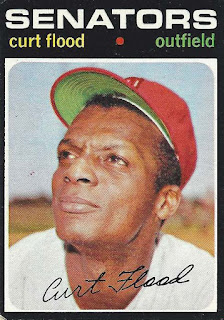 On October 7, 1969 Curt Flood began to change baseball as we know it. The Cardinals traded Flood to the Philadelphia Phillies. Under the reserve clause, Flood should have reported to the Phillies. He refused to do so and filed suit in court to have the reserve clause invalidated. The case dragged on through the 1970 season as Flood sat it out and waited. On November 30, 1970, with the case still in the courts, the Phillies traded their absent outfielder to Washington.

Flood agreed to report to the Senators and appeared in 13 games for Washington. There were flashes, but the old Curt Flood was no longer there. In 40 plate appearances Curt managed a .200 batting average and a .300 on-base percentage. He walked five times and struck out just twice. There were no extra base hits and Flood scored just four runs while accounting for two RBI.

Washington put Curt in center field, where he played in his glory days for the Cardinals. In 71 innings spread over ten games, Flood committed one rare error to drop his fielding percentage to an unusual .941 - 41 points below the league average. His missed season also appeared to have lowered his range significantly.

The results for Curt Flood in 1971 were disappointing. Manager Ted Williams still had confidence in Flood, but he no longer had confidence in himself. He was still locked in a legal battle he would end up losing to Major League Baseball and the stress of that was taking its toll. In spite of the fact that the owners approved the 10/5 rule in 1970, Curt would never benefit from it. After his slow start to the 1971 season, Curt Flood retired from Major League Baseball.
Posted by Spiff at 10:15 AM

I was so excited in the 1969/70 off-season at the moves the Phillies made. Sure they unloaded Dick Allen, but he had worn out his welcome by then. We were getting CURT FLOOD! Also Tim McCarver, Joe Hoerner, and in a separate deal, Dick Selma for the fading Johnny Callison. Rookies Larry Bowa and Denny Doyle were also going to be part of the team. The Phillies were going places!

Then Flood refused to report, and most of the air left the balloon.

As a long time Phillies fan, do you know if his concerns about the racial atmosphere in Philly as opposed to St Louis were valid?

Well, I was just a kid at the time, and lived in the suburbs, so I wasn't aware of any specific racial prejudices in Philly over and above anywhere else during that time (except for what I have read since then - about the Phillies being the last NL team to integrate, etc, etc). But by 1969 there were a number of black and Latin players on the Phillies (7 or 8 as I recall).

But Flood probably looked at how a black superstar (Allen) was treated by management and (by the end of Allen's time) the fans, and wanted no part of that.

Too bad. Flood was a great player. Thanks for the info.