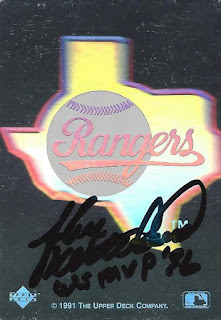 Well, I've had time to recover from the Rangers FanFest last Saturday. Time to offer a recap and review.

Spiff Jr and I got to the ballpark just about 0800 to get in line for the 0900 gate opening. It was a bit nippy standing in line but at least this year there was no wind. Surprisingly, the gates opened about twenty minutes prior to the start of the FanFest. That allowed most folks to get in before things got started.

Unfortunately programs and schedules were not handed out until after entrance. That robbed us of our normal planning time and made the beginning of the day feel a bit rushed as we tried to absorb and process the information we needed to plan our attack. Checking out the autograph schedule gave me the first let down of the day. Jose Guzman, Pete O'Brien, and Eric Nadel were on the schedule. None had been in the list of names released by the Rangers and so I had nothing other than generic Rangers stickers and hologram cards for them to sign. Pete O'Brien was a real kick since he won't sign through the mail and I would like to have him for a couple of team sets I am working on.

This year the autograph sessions did not start until 1100. Initially I was not impressed with this but, the more I thought about it, the more I liked it. With a couple of hours before guys started signing, we had time to get in a few things without feeling like we were missing out on autograph chances.

Headed up to the Rangers Foundation sale. Missed it last year but in 2014 they had some great deals. This year they were crammed into the Jack Daniels Club along with the Rangers Futures signings. Made for a very cramped space but folks were good about it all. Picked up a Prince Fielder bobblehead, 2015 Media Guide, a Rangers cereal bowl, and a couple of other small items for $20. Not too bad. If I didn't already have more than enough jerseys I would have grabbed one or two of the $25 ones they had for sale.

After the sale we met up with some friends, checked out the Rangers Hall of Fame museum, and headed down to the visiting clubhouse for the autographs. Got in line for Toby Harrah, Bobby Jones, and Kevin Mench about twenty minutes before they started signing. Good thing too. Unlike previous years, the staff was very prompt to cut the lines at 250 people this year. We ended up making every session except the 1400 one featuring Rusty Greer, Tom Grieve, and Dean Palmer. That line was already full and cut when we finished getting signatures from Jeff Russell and Mike Adams. We went ahead and got in line for the final session, to feature only Darren Oliver. Much to my surprise, not only was Oliver signing but Eric Nadel had been moved down from the previous session and John Wetteland was making an unannounced appearance. I had no card for Wetteland and ended up asking him to sign the Upper Deck Rangers hologram card featured above.

Made a couple more quick stops once the final autograph session ended then stopped by Duane's Sportscards after leaving the park. I needed to replace the 1972 and 1973 Topps Toby Harrah cards I pulled out of team sets for him to sign.

The delayed start of the autograph sessions worked out better than I expected, we got autographs from 13 former players and current coaches, and spent some quality father-son time visiting while waiting in lines. The biggest area to improve next year would be a more complete listing of players who might sign. I would rather have a list, pull cards, and have a player cancel than end up without something for a player to sign. All in all, it was a great day and I am looking forward to going back next year.
Posted by Spiff at 10:00 AM

Didn't make it this year due to the bronchitis that is still hounding me. Sounds like a great day. Hope we can meet up for a game this year. I'll let you know if I get the company tickets!

Sounds like a great time, those fan fests were always fun, except when they moved it to the convention center. That's when I stopped going. I hope I'll be back to games this year for some long overdue ip.

Sounds like a great time, those fan fests were always fun, except when they moved it to the convention center. That's when I stopped going. I hope I'll be back to games this year for some long overdue ip.

It was a great time. Too bad ya'll couldn't make it. I'll be trying to get out to a couple of games this year as well.