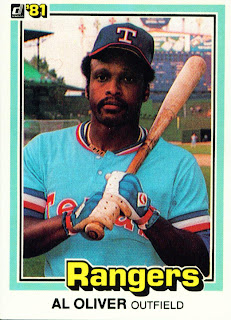 "Scoop" Oliver played for Texas for four years. His 1980 performance was memorable enough to land him number 15 on T.R. Sullivan's list of the 50 best seasons in Rangers history.

Oliver, shown here on card number 387 of the 1981 Donruss set, played mostly left field for the Rangers in 1980. He did well there but it was his offense that gets him mention on this list.

Those offensive fireworks netted Oliver some MVP consideration along with a Silver Slugger award and an All-Star appearance.
Posted by Spiff at 5:42 PM

I caught the very end of this the other night and it made me laugh, but it wasn't until reader Skip emailed me the transcript of the whole conversation that I understood exactly how funny it was. Joe Morgan decided to ask Jon Miller a question and what started as an opinion based discussion turned into a fishing trivia contest ending with talk of Snake (Kurt Russel) in Escape for New York.

Our emailer decided to transcribe the whole thing and if anyone is going to take that long to type this nonsense out, that's going up before the video. Enjoy and try to keep up!


"Jon, I gotta ask you a trivia question. I was fishing with Matt Franco, used to play for the Mets. I was fishing with him on a boat, and Matt Franco asked me this trivia question. He said he had talked to players past and present. He asked me, Which guy hit the hardest line drives most consistently of all I'd ever seen. Hardest line drives."- Joe Morgan
"That's a trivia question?"- Jon Miller
"Well, it was for me and him. We were playing trivia on the fishing boat."- Joe
"Where would I look up the answer to that?"- Jon
"Well, you should know the answer!"- Joe
"Give me the question one more time."- Jon
"All right. Who hits the hardest line drives of any player you ever saw on a consistent basis?"- Joe
"Dave Winfield."- Jon
"All right, keep going. That's one. That's "A". "A" wasn't right.- Joe
[Loud Laughs] "Yes it was right! I beg to differ!"- Jon
"I'm gonna give you, uhh … I'm gonna give … I'm gonna give you a hint. You even broadcast games for him."- Joe
[Long Pause] "I broadcast Dave Winfield's games."- Jon
"No … for the answer, I'm talking about. I'm telling you, he asked all the other players. I'm not saying—"- Joe
"Well, I'm saying, this is a question for which there is no correct answer."- Jon
"Yeah, there's a correct answer."- Joe
"Well, what did you say? What was your answer? Did you get it right?"- Jon
"Yes." [pause] "Al Oliver."- Joe
"Oh, Al Oliver. He was—"- Jon
"See!"- Joe
"He was a very good line drive hitter."- Jon
"I knew you would say that. See, I knew that you'd eventually come up with the answer."- Joe
[Al Oliver and Dave Winfield Talk]
"It was interesting because Matt Franco said if I got the answer correct, he would introduce to his cousin … the actor … Kurt Russell. And I said, 'Okay.'- Joe
"That's his cousin?"- Jon
"That's his cousin."- Joe
[Laughs] "So when did you meet Kurt?"- Jon
"Well I haven't met him yet. I just answered it last week."- Joe
"Well, what's taken him so long? We're in L.A. Kurt could have been here tonight. Or maybe he wants to wait till you're in New York, and we can help Kurt Russell … escape from New York."- Jon
"Yeah, that was a great movie. Snake Plissken. The Snake."- Joe
"You want to meet him bad, don't you?"- Jon
"Yeah, that was his … That was his name. Snake."- Joe