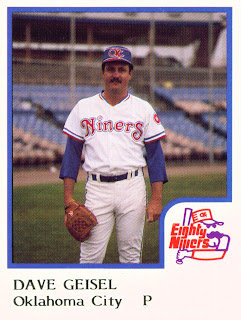 Dave Geisel played for the Oklahoma City Eighty-Niners in 1986. It was his last year in pro ball. By the time he donned OKC threads he had seven Big League seasons under his belt.

Geisel spent 1982 and '83 with Toronto. He was then drafted by Seattle in the Rule 5 draft.

1984 and '85 were spent with the Mariners. He was granted free agency in December of 1985. After the 1986 season with the Eighty-Niners it was the end of the road for Dave. He had seen the Bigs though. Much further than many of his minor league compatriots had managed to get.

Recently I was contacted by Steve over at The Greatest 21 Days. Steve is writing about the 1990 CMC minor league set, card by card. It is a great blog and a very interesting read. I highly recommend that you give it a try and see what happened to the players pictured on the cards in the set.
Posted by Spiff at 6:34 PM

Hey, thanks for the mention.