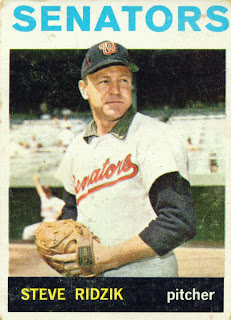 Steve Ridzik was in his second year with Washington in 1964. It was quite possibly the best season the middle reliever managed to put together in his 12 year career. Today we see him on card number 92 of the 1964 Topps set.

Steve's 2.89 ERA was not the lowest he ever posted. It was the lowest he ever posted while pitching over 15 innings in a season though. 1964 would see Steve take the hill for 112 innings, the second highest season total in his career. The 49 games he appeared in was also the second highest number of games in a season in his career.

While tying for the second most appearances out of the bullpen for Washington, Ridzik also showed in several other categories. His ERA was the second lowest out of the pen behind closer Ron Kline. The 31 walks he allowed were also second to Kline. He was also second in the pen in strikeouts with 60.

Interestingly, Steve was also fairly successful at the plate as well. At least he was for a pitcher. In 30 plate appearances he posted a .222 average with a .250 on base percentage. He had three RBI and even managed a double and a walk.

All in all 1964 wasn't too bad of a season for Steve. Too bad it had to come with a Senators team that went 62-100 on the year and ended up in ninth place in the American League.
Posted by Spiff at 6:14 PM

I'm starting to think they made up players to put on Senators cards in the early 1960s. I've heard of none of these guys.

(I guess that's my problem isn't it?)

Yeah, I was just thinking when I posted this card that a lot of these guys are unknowns.