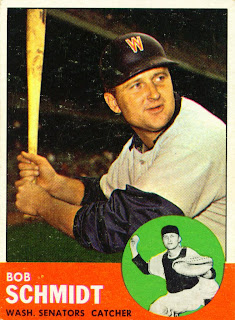 1963 was Schmidt's second and final season with Washington. In fact, he didn't even last half of the season with the Senators. On May 8, 1963 he was sold to the New York Yankees. He had appeared in just nine games for Washington.

In those nine games Bob played in the field only eight and logged 32 innings behind the plate. He had only 18 plate appearances.

Practically no impact on the team.
Posted by Spiff at 12:01 PM