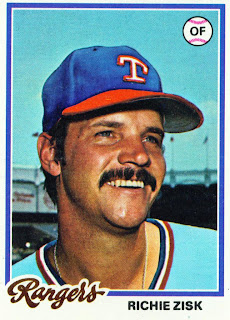 On January 11th of this year I sent Richie Zisk an extra copy of card number 110 in the 1978 Topps set. I also sent a 1979 Topps card. Included were a self-addressed stamped envelope and a short note asking Mr. Zisk to sign the cards. I got the cards back today.

The the card pictured isn't the one I sent to Mr. Zisk. It's in about the same shape though, unsigned. Richie (or someone assisting him) didn't even take the cards out of the letter they were wrapped in. Just put them in the return envelope and sent them back.

Why? I have no clue. No reason was given as to why Mr. Zisk declined to sign. In the past I have gotten notes back stating that the address was wrong, the player no longer signed for various reasons, that the player was out of town for a few months. Not this time though. This time my request was zapped with no explanation. Maybe it was the terrible airbrushing job on Richie's cap on this card.
Posted by Spiff at 4:40 PM

That's a bummer. Zisk is on my list of players I want to send out to this year.