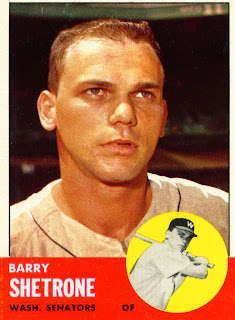 Following up Bob Schmidt's no impact season in 1963 from last Saturday we have Barry Shetrone on card number 276 of the 1963 Topps set. Barry had an even briefer 1963 season with the Senators than Schmidt had.

The back of Barry's card says, "After several shots with the Orioles, Barry was dealt to the Senators last winter." That's true. Barry came to Washington on December 5, 1962 along with Marv Breeding and Art Quirk in exchange for Pete Burnside and Bob Johnson.

The 1963 season wouldn't be any better for Barry. He appeared in two games, both times as a pinch hitter. He never reached base but managed to put the ball in play both times. He never appeared in the field.

Though Shetrone would hang around in the minors until 1967 he would never again get back to Bigs. Barry passed away in July of 2001 at the age of 63.
Posted by Spiff at 5:26 PM