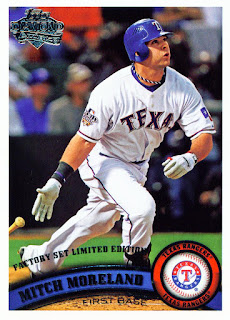 Normally if a Rangers pitcher had just won his fourth victory of the season before the end of April and had improved with just about every start, I would post his card. Unfortunately I have no cards of Yu Darvish. So, in spite of his nine strikeouts in seven innings last night, I can't post a card of his.

I can post a card of Mitch Moreland though. Here he is on card 634 of the 2011 Topps 60th Anniversary Factory Set. Mitch batted 8th last night. In the seventh inning he sent a solo shot over the wall. A few minutes later Craig Gentry, batting 9th also went yard. Back-to-back jacks from the bottom of the order!

Those shots helped put the Rangers 4-1 win on ice. If they keep it up I had better add Gentry and Moreland cards to my shopping list alongside Darvish.
Posted by Spiff at 6:29 PM