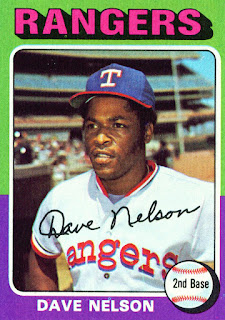 So far the only news out of Spring Training is that Yu Darvish is in camp and the Japanese media is going bonkers.

Dave Nelson, shown here on card number 435 of the 1975 Topps set, was feeling the squeeze in 1975. Young Toby Harrah and Roy Howell had pushed Len Randle over to second base. That left Dave as the old and odd man out - he was 31 years old and had been battling injuries.

The result was a pretty major dip in Nelson's playing time. Appearing in just 28 games he would make only 92 plate appearances. Probably as a result of lack of use, his batting average would drop to .213. However his on-base percentage would stay almost steady at .289. Neither were particularly good numbers. Dave was also slowing down a bit - he stole just six bases all season.

On defense Dave would play just 182 innings, all at second base. He would commit five errors for a .959 fielding percentage. That was 16 points below the league average.

With Lenny Randle seemingly firmly entrenched at second base and Toby Harrah at shortstop the Rangers apparently had no room for Dave Nelson. On November 12, 1975 they traded him to the Kansas City Royals for pitcher Nelson Briles.
Posted by Spiff at 6:12 PM