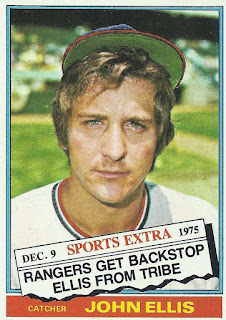 Catcher/first baseman John Ellis, shown here on card number 383T of the 1976 Topps Traded set, came to Texas from Cleveland in a December 9, 1975 trade. In return the Rangers sent Ron Pruitt and Stan Thomas to the Indians. Ellis' role was supposed to be as a back-up for first baseman Mike Hargrove and catcher Jim Sundberg.

What actually happened was that Ellis served as designated hitter in three games and spent seven games at catcher.

John put in 39 innings behind the plate without committing an error. He also caught two of the four runners trying to steal on him.

On the other side of things, Ellis posted a .419 batting average in 31 plate appearances. He didn't work a walk but a .419 on-base percentage isn't bad. His lone home run came in the second inning of a May 9th game in Boston. That home run came at a good time as it helped Texas win their eighth straight and keep a hold on first place.

Coming up in the 5th inning of the same game, Ellis singled. Up came Toby Harrah. Harrah hit a bounding ball to second base. Ellis thundered down to second and slid in hard to try and break up the double play. The slide was too hard and John was still on the ground as the dust cleared. Coming in to the bag he had dislocated his left ankle and broken his leg.

That was it for the season for John Ellis. The rest of the year was spent in healing and therapy. He was determined to play again in 1977 but it would be a long haul.
Posted by Spiff at 2:58 PM