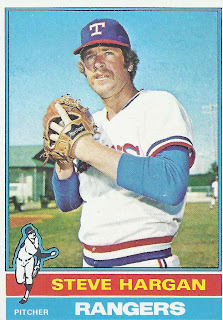 Steve Hargan, seen here on card number 463 of the 1976 Topps set, was the workhorse of the Rangers bullpen in 1976. He also served as an occasional spot-starter.

Filling a long relief role, Steve pitched 124.1 innings in 35 appearances.  While the appearances didn't lead the bullpen, the number of innings pitched did.

Hargan did pretty decent in those 124.1 innings. He managed to drop his ERA and WHIP from the previous season. The ERA totaled to 3.62 and his WHIP to 1.327.

All in all Steve Hargan seemed to have made the adjustment from starter to reliever. At least the newly-formed Toronto Blue Jays thought he had. They claimed Hargan from Texas on November 5th in the 1976 expansion draft. Texas then traded Roy Howell to the Blue Jays to get Hargan back along with Jim Mason and $200,000 on May 9, 1977.

Steve would make six appearances for the Rangers out of the bullpen before the end of the 1977 season but his 8.76 ERA brought little relief. On December 13, 1977 Texas sold Hargan's contract to the Atlanta Braves. This time he wouldn't be back.
Posted by Spiff at 8:15 AM

It seems like there is a story to that expansion draft. I wonder if they protected Howell? Why trade Howell for Hargan when you could have protected Hargan to begin with? I wonder how many they could protect and why Hargan wasn't one of them?