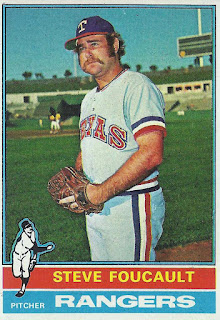 Returning to the middle of the bullpen meant at least a partial return to his 1974 form. Foucault appeared in fewer games than in 1975 but he seemed to handle the workload better. His ERA dropped .79 points to 3.33 and his WHIP dropped almost .2 points to 1.229.

Steve seemed to be on the road back. A little bit of improvement in 1977 could see him back in the closer's role and on top of his game. That improvement wouldn't happen in a Rangers uniform though. On April 12, 1977 Texas sent Foucault to Detroit in exchange for slugger Willie Horton.
Posted by Spiff at 8:12 AM

And Willie Horton would later become famous for being the subject of a television ad that helped sink my presidential campaign in 1988. I let him out of prison on furlough because I thought he was going to be DHing for the Red Sox. How could I know he would assault, rob and rape a couple down in Maryland?!

Wrong Willie. That's why you lost, you made no sense.