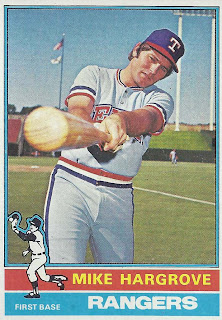 Mike Hargrove, shown here on card 485 of the 1976 Topps set, found himself back at first base for the 1976 season. The starting first baseman, Mike would appear only at first and as the designated hitter.

Hargrove played 1,259.2 innings at first in 1976. He made an astounding 21 errors for a fielding percentage of .984. That was eight points below the league average.

On offense The Human Rain Delay would make 654 time consuming trips to the plate. For the first time in his Major League career his batting average would drop below .300. In spite of his .287 average, Mike's on-base percentage would go up by two points to .397. That was due in large part to his league-leading 97 walks. Hargrove also hammered 30 doubles - the highest of any Texas starter.

In spite of the drop in batting average, things were looking up for Mike Hargrove. He had the first baseman's job nailed down. If he could fix his glove issues he could probably keep it. Sooner or later some of those doubles would start to drop over the fence for home runs and the ability to work walks would always come in handy. 1977 had the potential to be a good year for Mike.
Posted by Spiff at 2:53 PM