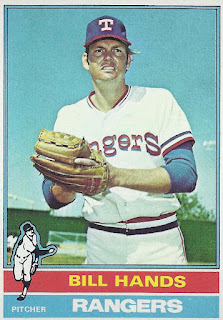 By the time Bill Hands appeared on card number 509 of the 1976 Topps set his Major League career was over. Perhaps if Bill knew this would be his last card he might have tried to look a bit more cheery.

Following the 1975 season Texas had traded Hands to the Mets on February 24, 1976. In return the Rangers had obtained George Stone. Neither Stone nor Hands would see Major League action after the trade. As a matter of fact, neither would even play in the minors again.

I have to confess that I am a bit baffled by the fact that both players' careers ended just after the trade. For one player in a trade to hang up the spikes is not unusual. For both to disappear from the active player ranks is strange.
Posted by Spiff at 10:02 AM

Hands was used on the Rangers' Hands Team when attempting to prevent a fumble during an on-side kick.