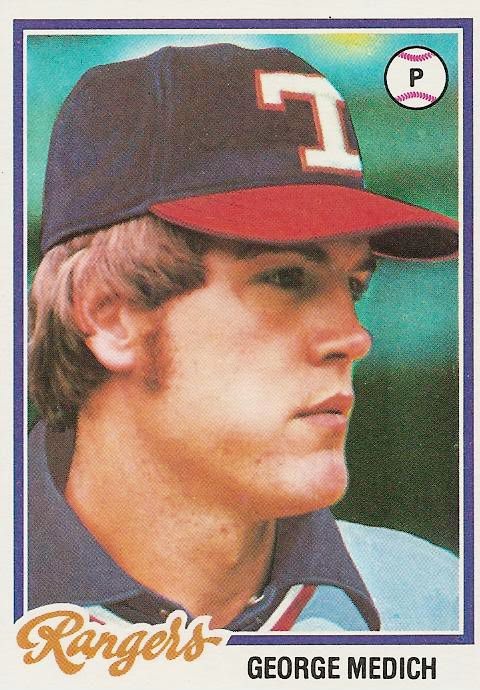 The Rangers signed George Medich as a free agent on November 11, 1977 in an attempt to bolster their starting rotation. That's probably the reason for the airbrush job on card 583 of the 1978 Topps set. There can be no reason for how poorly done it is.

"Doc" earned his nickname when he started medical school the day after his Major League debut with the Yankees. He made it successfully through and became a full-fledged MD while playing Major League baseball. In 1978 he was a first year resident in general surgery at Allegheny General Hospital in Pittsburgh. The hours were considerably worse than those of a MLB player.

Sometimes those hospital hours intertwined with baseball. On July 17, 1977 in Baltimore, Medich was running wind sprints in the outfield prior to a game with the Orioles. Suddenly the loudspeaker requested medical assistance in section 7 of the stands and asked for any medical personnel in the park to respond to that location. Medich did so and was apparently the only doctor in the house. He found 61-year-old Germain Languth in apparent cardiac arrest and began CPR. Doc kept it up until paramedics arrived and took over. Three weeks later Languth walked out of the hospital. Several other doctors credited Medich with the save.

When he wasn't saving lives, Medich made 22 starts in 28 appearances for  Texas in 1978. He pitched 171 innings and put together a 3.74 ERA and an 1.275 WHIP. He ended the season with a 9-8 record and two saves. None of those numbers were career bests but Doc served reasonably well as the Rangers fourth starter and occasional emergency reliever. Texas would like to see some improvement in 1979 though. After all, a fourth starter can be challenged for his spot in the rotation.
Posted by Spiff at 12:46 PM