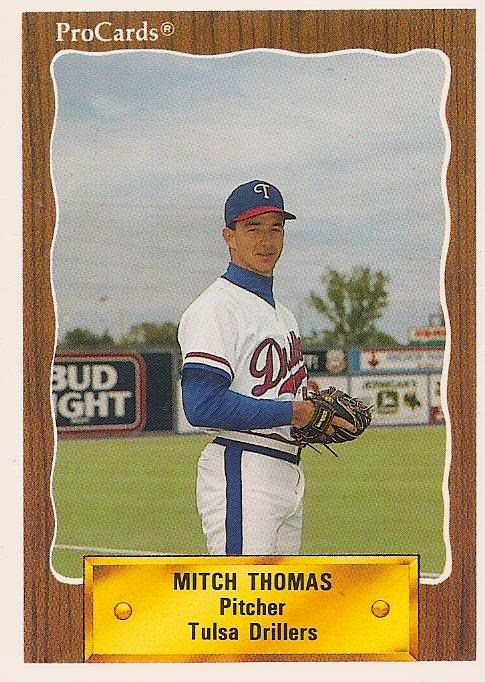 Mitchell Drew Thomas, shown here on card 1157 of the 1990 ProCards Tulsa Drillers set, was the Rangers pick in the 8th round of the 1985 draft. He got started on his pro career the same year with the Gulf Coast Rangers in the Rookie League.

Thomas also played for the Single A Salem Redbirds in 1985 and again in 1986. In 1987 he appeared with the Single A Charlotte Rangers.

After three seasons of Single A, Mitch got a ticket up to Double A Tulsa. He was with Tulsa in 1988 and 1989. Apparently he got injured late in the 1988 season or first thing in 1989. He only played in one game in 1989 and only pitched four innings. Thomas remained at Double A for the 1990 season.

If I had to guess, I would say Mitch Thomas was injured in his first start of 1989 and didn't return to play until midway through the 1990 season. By that time he was significantly behind the developmental curve. Apparently either the Rangers or Thomas felt he would be unable to complete a come-back. 1990 was his final season as a professional ball player.
Posted by Spiff at 1:40 PM