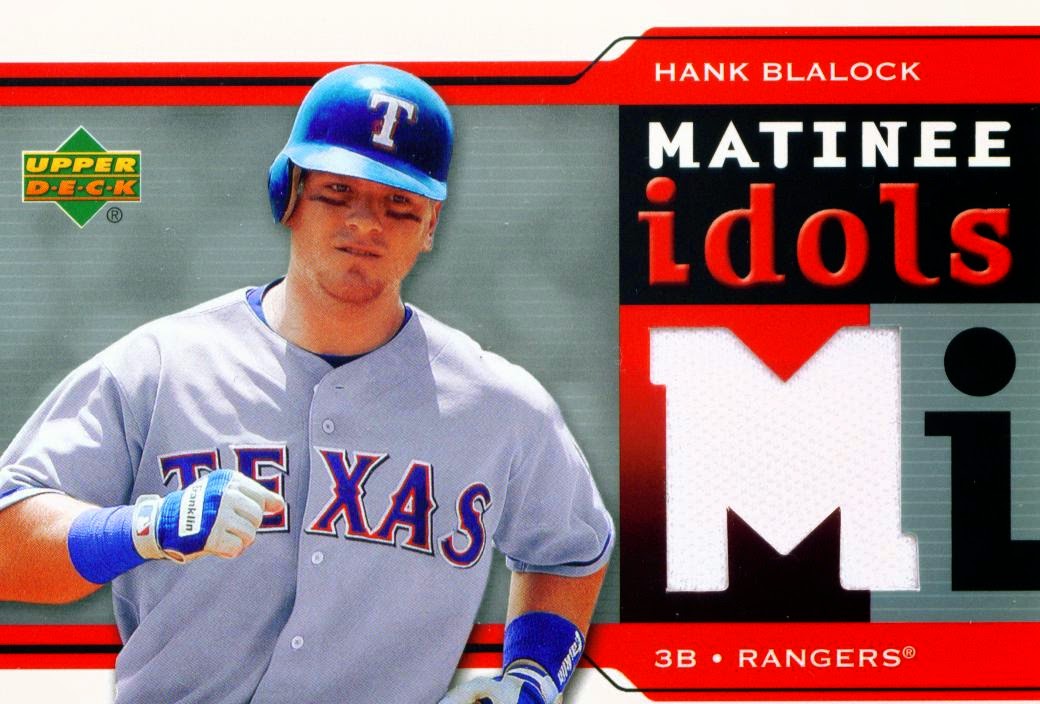 Not much going on in Ranger land recently. Been pretty hectic in my world though and I apologize for the lack of recent posts. The lead-up to Christmas has begun and my time seems to be disappearing before my very eyes. Doesn't look like things will be slowing down anytime soon either.

With the lack of activity on the Rangers front, I opted for a random Rangers game-used card today. Hank Blalock got the call on this 2004 Upper Deck Matinee Idols card featuring a swatch of Hank's jersey.

I could use some help from my readers (if my lack of posting hasn't driven them all off). The Christmas giveaway was a success, even if I would have preferred to send out more packages. Space was cleared enough to allow me to sample the upcoming 2015 releases. Then a very nice problem. I was given a defunct collection. Mostly Indians. Enough to fill up the empty space and then some in the American League box. Enough other cards to take up most of the empty space in the National League box.

I need an Indians collector willing to take free cards. A Giants collector would also be appreciated since I am reaching critical mass on the black and orange. Of course, any space cleared would be good. If you missed the Christmas giveaway please let me know. Include a couple of teams you would be interested in (in order of preference). Email me at rmatlack3 at juno dot com with your name, address, and team list. If I have cards left from any of the teams you list I'll get some out to you in the next couple of weeks. Free cards. Can't beat that can ya?
Posted by Spiff at 11:07 AM

I'll take the Indians and any Blue Jays--do you ship to Canada?

I'm in Canada, and I will take some Giants and Any Yankees. Thanks.
Please email me at caitlinjennings64@yahoo.ca