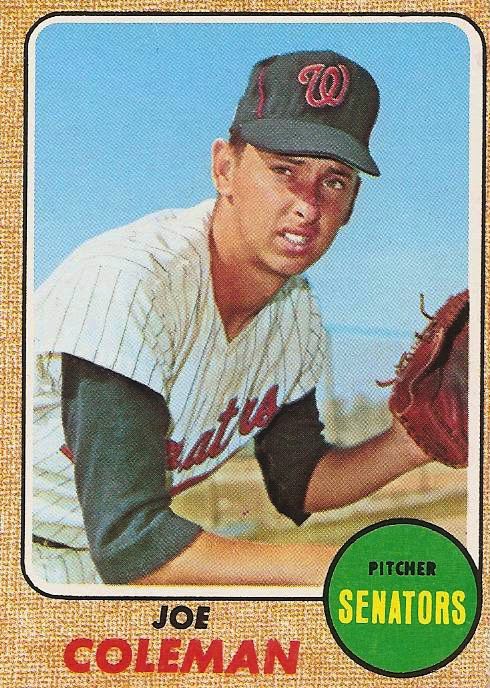 Joe Coleman looks less than impressed with the pitch he just threw on card 573 of the 1968 Topps set. Seeing as this is probably a pose, it's an interesting facial expression.

1968 was Joe's first full season in the Majors. He made 33 starts for Washington and completed 12 of them. Two of those complete games were shutouts. Coleman led the club in starts and never appeared in relief. He ended the season with a 12-16 record.

Over the 223 innings he pitched (team high), Joe put together a 3.27 ERA and an 1.179 WHIP. He whiffed 139 opposing batsmen (team best) while issuing 51 free passes. His 2.73 strikeout-to-walk ratio was the best on the team. Joe also tossed nine wild pitches and hit 12 batters.

Joe Coleman had been a workhorse for the Senators in 1968 and appeared to do well in his first full season with the club. He had some work to do though. His control obviously needed to be polished up. If Coleman could lower his WHIP a bit he might see his ERA drop some. That could put him from being a serviceable pitcher to a good one. Washington might have something in Joe Coleman and they wanted to see him develop quickly.
Posted by Spiff at 11:38 AM

His father (Joe Coleman Sr.) pitched from 1942-55, mostly for the Philadelphia Athletics.