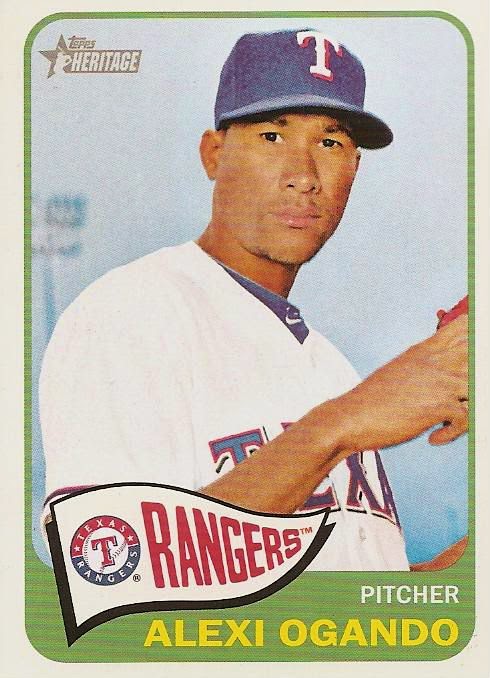 Wow! It's been a long time since my last post and for that I apologize. Things got really hectic aver the past two weeks and I wasn't able to get enough posts pre-scheduled to make up the difference. I'm back in town now though and have no plans for any further vacations in the immediate future. Hopefully that means the regular posts are back. Lots going on with the Rangers since I last posted.

Mitch Moreland and Jurickson Profar both got good news. They had MRI's and things are looking good. Moreland should be full strength by Spring Training and Profar should be back by the start of the 2015 season.

Adam Rosales, Michael Kirkman, and Alexi Ogando, shown here on card 56 of the 2014 Topps Heritage set, all received bad news. The Rangers non-tendered the trio, making them free agents. Not a real surprise with any of the group. Rosales was a stop gap utility player and Kirkman just never came around. Ogando's elbow is a major concern and his failure to pitch in winter ball sealed the decision for Texas.

The Rangers have re-signed pitcher Colby Lewis to a one year deal. That's a real kick in the teeth for the anti Jon Daniels crowd. It's a good thing for the team I think. Colby struggled early in the 2014 season but by the end of the season he seemed to be mostly recovered from his hip surgery and back to his old self. If that continues in 2015 this signing could be the one that really helps the club.

Also, amidst all the confusion of the past couple of weeks, I got the Christmas giveaway packages sent out. Some were smaller than others due to a lack of cards for those particular teams. Hopefully all arrived safely and were enjoyed by the recipients. If you missed the giveaway just let me know your address and team preference and I'll see what I can do. I have no Rangers, A's, Angels, or Royals. I have a lot of Giants, Indians, Cubs, Cardinals, and Orioles. The rest of the teams have a few cards left as well.
Posted by Spiff at 11:18 AM