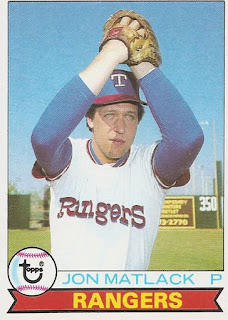 Brought to Texas as part of a dizzying four-team trade on December 8, 1977, Jon Matlack had an outstanding year for the Rangers in 1978. Matlack, shown here on card 315 of the 1979 Topps set, led the team with his 2.30 ERA and came in second best in the Majors. It's a Rangers season best record for a left-handed starter that still stands. He didn't get a lot of run support though and ended the season with a pedestrian looking 15-13 record. Going into 1979, Texas was hoping Jon could repeat his 1978 performance and the lineup could give him more run support. Neither happened.

On April 1, in Florida, Matlack was warming up prior to facing the Kansas City Royals in his final Spring Training start. He had enjoyed a fine spring and was slated to start the Rangers season opener in Detroit. As he tossed down the rosin bag, Jon felt a pain in his left shoulder. The Rangers shut him down and he didn't make another start until May 1st. He lasted through July 1st, pitching through pain with pronounced swelling after every start. That wasn't working well so the Rangers shut him down again. Late in the season Matlack underwent surgery to remove bone chips from his left elbow. He wouldn't throw a baseball again until November, 1979.

1979 had been a painful bust for Jon Matlack and the Rangers. The club was convinced the two were linked. Jon had a lot to come back from in 1980 but the front office thought he could do it. Texas was planning on bringing him along carefully in Spring Training but were hoping he would be ready for the regular season. If he could regain anything close to his 1978 form, it would be a huge improvement over the 1979 campaign.
Posted by Spiff at 10:00 AM