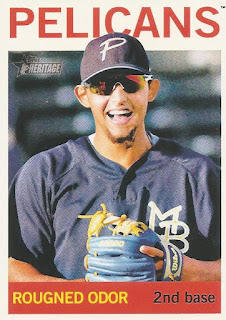 Delino DeShields headed to the Disabled List yesterday with a left hamstring injury he suffered in Sunday's game. That's a real downer because Delino has been a pleasant surprise in the outfield this year and has been one of the cogs keeping the Rangers running. He'll be gone at least 15 days.

You'd think the Rangers would call up an outfielder to replace DeShields on the roster. Not so. Roughned Odor, shown here on card 23 of the 2013 Topps Heritage Minor League set, got the call from Triple A. Roogie was the Rangers starting second baseman at the beginning of the season but struggled in the field and at the plate. He was batting just .144 after 29 games when Texas sent him down. He did well at Round Rock though and the Rangers decided to give him a second look.

The call-up meant moving Hanser Alberto from second over to third base to cover for the injured Adrian Beltre and sending Joey Gallo to left field to take over for DeShields. It seemed to work for the Rangers.

Facing the Dodgers in his return, Odor went 3-for-3 with two RBI and made a couple of very nice plays in the field. That helped give starter Yovani Gallardo four runs of support. That was all he would need as he cruised through seven innings of scoreless ball. Par for the course, the bullpen did allow one run but the Dodgers could not climb back into the game. Final, 4-1 Rangers.

Nice to see a strong start out of Gallardo. The starting rotation has been tremendous for Texas recently. Couple that with Gallo, Alberto, DeShields, and now Odor giving some strong support and the result is a 34-30 record. Just a few weeks ago the Rangers were near the bottom of the division and a .500 season seemed out of reach. Now they are four games over, in sole possession of second, and just 2.5 games behind first place Houston. The season suddenly got interesting.
Posted by Spiff at 10:57 AM