Rangers out to stop losing streak. 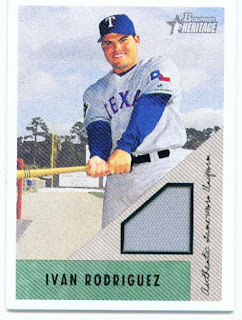 Well, the Rangers have been being hammered the past few days and are now four games behind first place Houston. Texas is 4-6 in their last ten games and is riding a four game losing streak. They are only a half a game ahead of the third place Anaheim Angels.

Tonight Colby Lewis takes the mound to try and salvage a win from the current series with the suddenly hot Oakland A's. Colby's had success in the past against Oakland so he might be able to cool them off a bit. The Rangers need a stopper to end this losing streak before it becomes crippling. Of course, the A's are sending Ranger killer Sonny Gray to the mound with his 1.95 ERA and 8-3 record. That means Texas had better bring their A game or it's going to be sweep time.

In order to help Lewis and the guys out, I am posting this 2002 Bowman Heritage  Jersey card of Ranger great Ivan Rodriguez. If Pudge can't bring a team some good luck and hard nose playing then I don't know what can. Against Sonny Gray you need all the luck and hard play you can get.
Posted by Spiff at 7:05 AM