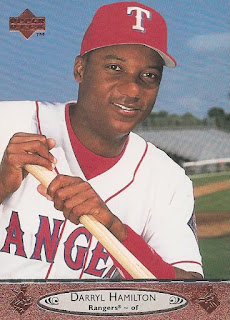 Most of you have probably already heard that former Ranger Darryl Hamilton was killed this past Father's Day in his home in Texas. Hamilton, shown here on card 467 of the 1996 Upper deck set, played for the Rangers in 1996.

MLB.com's article doesn't have a lot of detail about Hamilton's death but there are two things that stand out to me as particularly tragic.

The first is that Darryl was apparently shot and killed by the mother of his young child before she turned the gun on herself. Again we see a circumstance where someone is killed by a loved one. This should not be so.

The second thing that I noted in the article is that the couple's young child was in the home at the time and was unharmed. Physically that is. This youngster will have to deal with the loss of Dad and Mom, as well as the tragic circumstances of their deaths, for the rest of their life. That's a heavy burden and one that nobody should have to bear.

I don't know much of the story and can't pretend to know what brought this tragedy about. I can't even say who the aggressor was. I do know that home and loved ones should be safe, not a source or scene of violence. We see too much family violence in this day and age it seems. If you know someone suffering domestic abuse; man, woman, or child, take a minute and do something. Make a call, offer a safe place, give support. Don't let a worse tragedy unfold.
Posted by Spiff at 10:00 AM