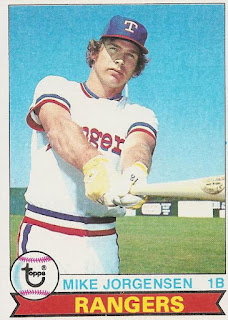 Mike Jorgensen, shown here on card 22 of the 1979 Topps set, came to the Rangers as a free agent signing in January of 1978. He had a reputation as a slick-fielding first baseman with a light bat. The only time in his career he batted over .300 was 1974. That was fine with Texas. They used Mike mostly as a late-inning defensive replacement for their regular first baseman, Mike Hargrove. That allowed the club to overlook Jorgensen's .196 batting average.

Things changed between the 1978 and 1979 seasons though. The Rangers traded Hargrove to San Diego and first base was wide open. Jorgensen was considered one of the primary contenders for the regular job but so was rookie Pat Putnam.

Apparently Mike's bat cost him the contest with Putnam and he ended up serving as a backup for a second year in a row. Jorgensen did get 177 plate appearances over 90 games in 1979. He improved his batting average to .223 and posted a .293 on-base percentage. The low on-base percentage can be partially attributed to Jorgensen's 29 strikeouts as opposed to just 14 walks. The seven doubles and six home runs were not enough power to overcome the average and on-base percentage.

Jorgensen actually played in fewer games at first in 1979 than he did in 1978. He appeared at first in 60 games for the Rangers and made four muffs in the course of 277.2 innings to lower his fielding percentage to .988. That was four points below the league average. He also played 117.2 innings in the outfield over 20 games without a miscue.

Things were not looking good for Mike Jorgensen's future in Texas. He hadn't been able to get his bat going enough to snag the regular first baseman's job and his fielding was not what it had been. The Rangers weren't sure what to think about Putnam but they had serious doubts about Jorgensen. It looked unlikely he would get a second shot at first base.
Posted by Spiff at 1:00 PM