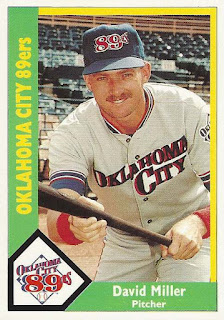 David Miller shows off perhaps the most unusual pose for a pitcher on card 156 of the 1990 CMC set. Not only is Miller posing with a bat, he's playing for an American League affiliate. I can't imagine most American League teams want their farm teams spending a lot of time honing a pitcher's batting skills. After all, Dave would have a total of zero plate appearances during his time with Oklahoma City.

Miller was originally drafted by the Kansas City Royals in the 3rd round of the 1984 January Draft. He must not have signed though because he never played in their system and didn't begin his pro career until 1986. Somehow, in the intervening time, the Braves got hold of David. He played from 1986 through 1988 in the Atlanta system, working his way up the chain to Triple A. I'm not sure how Miller came to the Rangers system, but 1989 was his first season there and he spent the entire year at Triple A with OKC. His ERA and WHIP were the highest they had been since a short stint with Pulaski in Rookie Ball during the 1986 season. That denied him a shot with Texas and left him at Triple A for the 1990 season.

Miller was not the same pitcher in the Texas farm system as he had been in the Atlanta chain. He turned in two seasons with his ERA north of four and his WHIP well over one. Even the pitching-hungry Rangers would raise their eyebrows at those numbers. I'm not sure what caused the change, perhaps an injury, the batters catching up with Dave, or maybe just the change in coaching. Whatever the reason, 1990 was Miller's last with Texas and the last of his playing career. At 25 years of age, his pro playing days were behind him.
Posted by Spiff at 11:20 AM