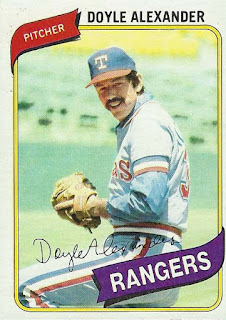 Time to kick off the 1980 Topps Rangers team set. Headed into the 1980's, the club had high hopes. There had been a few lean years following the move to Texas in 1972 but, starting in 1974, the team had been a contender for several years as well. There were hopes that the franchise could build on those early successes. Instead, the 1980's became a decade of futility as they immediately dropped to fourth in 1980. 1981 and 1986 would see second place finishes. Both were Cinderella teams. There were two last place finishes as well. Add the three sixth place (out of seven) finishes to those two basement years and half the decade was spent in last or next to last place. It wouldn't be until the 1990's that the team would again be viewed as a consistent threat to anyone.

Doyle Alexander, shown here on card 67 of the 1980 Topps set, was coming off two straight mediocre seasons in 1978 and 1979. The Rangers originally picked Alexander up as a free agent in November of 1976 to help in their 1977 pennant push. He did just that but then seemed to stumble a bit.

On December 6, 1979 the Rangers traded Alexander, Larvell Blanks, and $50,000 to the Atlanta Braves for Adrian Devine and Pepe Frias. Texas would soon sorely miss the departed starter.
Posted by Spiff at 10:29 AM