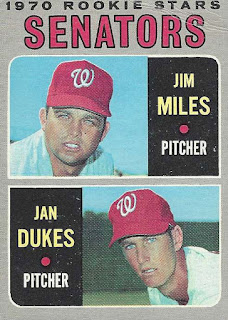 Hope everyone had a good Thanksgiving with family and friends. The blog got away from me with all the goings on and giving thanks.

Today we see Jim Miles and Jan Dukes on a creased card 154 of the 1970 Topps set. This is one of the cards I have slated for replacement once I am mostly done putting together the Senators team sets. For now, it's a good filler.

Washington signed Jim Miles as an amateur free agent in 1966 and started him off at Single A the same year. He wasn't particularly impressive and didn't see Double A until 1968. That season he appeared at Double A, Triple A, and had a four inning stint with the Senators as a September call-up. In 1969 he played in ten games for Washington and pitched 20.1 innings. His 6.20 ERA insured he would not stick. Jim spent the rest of the season at Triple A. Miles would not appear in a Major League game again. He hung on at Triple A through the end of the 1972 season before hanging up the spikes for good. At least Jim could boast he struck out Mickey Mantle the only time he faced him.

Jan Dukes was a pitcher in high school and college. He injured his arm pitching for Santa Clara University. To give the arm time to heal, Dukes spent a year as an outfielder. The arm was never quite the same though. Washington still thought highly of Jan and drafted him in the first round of the 1967 draft. He started his pro career the same year with a stint in instructional league before being assigned to Double A. He would end the season with Triple A Hawaii. 1968 saw a pedestrian season for Dukes at Triple A. He would start the 1969 season at Triple A as well. The Senators called Jan up in September of 1969 and he got into eight games, pitching 11 innings. His 2.45 ERA was respectable. It was back to Triple A for most of 1970 for Dukes but he did get another short stint with Washington. This time 6.2 innings over five games and a 2.70 ERA. 1971 passed at Triple A with no trip to Washington. Following the franchise move to Texas, Jan got a cup of coffee with the Rangers in 1972. Just 2.1 innings in three games this time and a 3.86 ERA. That would be all for the former high school pitching legend. By the start of the 1973 season, Jan Dukes was part of the Montreal Expos farm system. He played part of a season at Triple A for Montreal before finishing out the year playing in the Mexican League. That was it for Jan Dukes' playing career.

Topps designated Jim Miles and Jan Dukes as Rookie Stars on their shared 1970 card. Looks like Topps went 0-for-2 with that prediction. Miles was already done in the Majors by the time this card was issued. Dukes was a little more iffy. In 1970 he was having some definite problems but still had the chance to make good. However, the college arm injury turned out to be too much to overcome.
Posted by Spiff at 10:23 AM