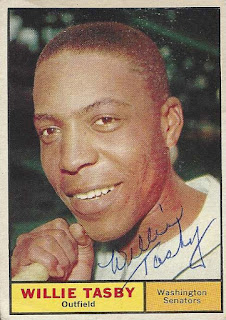 The most recent autograph request to come back was this 1961 Topps card of former Senator Willie Tasby. Can't get enough of the signed cards from the first year in existence of the franchise. Good stuff. I sent this card, and a note asking for an autograph, to Mr. Tasby on October 26th of this year. The turn around was impressive, with the card coming back signed on November 5th. Mr. Tasby even took the time to re-wrap the note around the card to protect it on the return journey. Many thanks to Willie Tasby and all the other players who have signed for their time.
Posted by Spiff at 10:45 AM