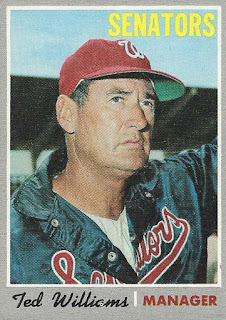 Ted Williams looks rather serious on the front of card number 211 in the 1970 Topps set. He had a lot to be serious about in 1970.

Coming off his maiden season of managing in 1969. A lot was expected from Teddy Ballgame in 1970. After all, he had just led the Senators to their best season yet and was in the process of writing a book about hitting. Fans expected better hitting and more winning. They got a little better hitting, poor pitching management, and less winning.

Under Williams, the 1970 Washington Senators lost 16 more games than they did in 1969 and slipped back below .500. Their 70-92 record dropped them from fourth place to sixth (read: last) in the American League East. They were back in the cellar again and the fans deserted in droves. Over the course of the season only 824,789 came out to see the Senators in person. That was eighth among the 12 American League Teams. Considering the Royals and Brewers were in just their second year, those were some low attendance numbers. The lack of ticket sales helped increase the financial pressure on the team. Owner and General Manager Bob Short's fiscal mis-management didn't help.

All in all 1970 was a sudden plummet back to earth for Ted Williams and the Senators. Ted didn't need to worry though, he wasn't going anywhere. Short was still trying to trade on Williams' name to bring in fans and would have had trouble finding another manager anyway. Ted Williams would be at the helm for the 1971 season. Unfortunately, Bob Short was about to pull off a trade that would further hamstring the already struggling Senators.
Posted by Spiff at 10:45 AM