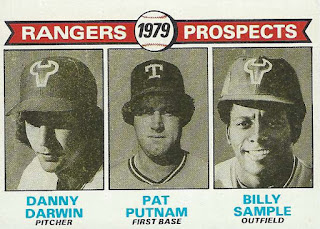 Time to finish up the 1979 Topps Rangers team set with card number 713. The Rangers were at the end of a decade that had seen the franchise move to Texas and post several competitive seasons. There was hope that the success would continue into the 1980's. In order for that to happen, the club would have to depend on the young talent in the minors to make good.

Danny Darwin appears in his Tucson Toros cap in spite of 1979 being the last season he would wear it. With a 3.60 ERA and an 1.379 WHIP carrying his 6-6 record, Darwin was called up to the Majors on June 16, 1979. He would not return to the minors. Used mainly as a spot starter and long reliever with the Rangers, Danny made 20 appearances for Texas. Six of those games were starts and Darwin pitched a total of 78 innings. He posted a 4.04 ERA and an 1.026 WHIP to end the season with a 4-4 record. Most encouraging, Danny struck out 58 while walking just 30. The youngster had potential.

Pat Putnam was the main reason the Rangers felt comfortable trading Mike Hargrove to the Padres during the off-season. Putnam had brief stints with the Rangers in 1977 and 1978 while he was turning in solid seasons with the Toros. 1979 would be his first full Major League season and the Rangers were expecting big things from the young man. Pat performed well with a .994 fielding percentage in 96 games at first base. That put him a tick above the .992 league average. At the plate Putnam batted .277 in 465 plate appearances and managed a .319 on-base percentage. He struck out a lot (50 times as opposed to 23 walks) but made up for it in power. His .458 slugging percentage was second only to Al Oliver among Rangers regulars. That power translated to 19 doubles, two triples, and 18 home runs (in a tie for team high). Those numbers seemed to justify the Rangers expectations and garnered Pat some Rookie of the Year consideration.

The Rangers drafted Billy Sample twice, once in 1973 and again in 1976. he signed the second time and wasted no time in tearing up Rookie Ball and Double A pitching. In 1978 he was assigned to Triple A Tucson and continued his rampage. He got a cup of coffee with Texas in 1978 and would be with the Rangers for the entire 1979 season. In 128 games, Sample made 377 trips to the plate and posted a .292 batting average. He was well-disciplined hitter and walked 37 times while striking out just 28 times. That helped bump his on-base percentage up to .365, second on the team to Al Oliver. Billy didn't have Pat Putnam's power but he did knock 21 doubles, two triples, and five home runs en route to scoring 60 runs and bumping in 35 RBI. Sample primarily played in left field for the Rangers, 632.2 innings in 92 games. He also put in 68 innings over ten games in center field and 28 innings over five games in right field. He avoided committing an error at any position all season. That put his fielding percentage well above the league average.

All in all, based on performances prior to 1979, all three of these players clearly deserved to be on this prospects card. The Rangers had some legitimate prospects and needed sustained success from all three to keep the team near the top of the American League West going into the 1980s.
Posted by Spiff at 11:30 AM