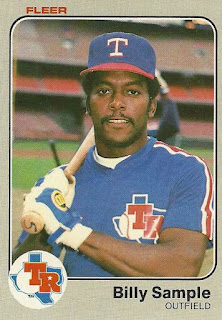 I recently sent out an autograph request to former Rangers outfielder Billy Sample, shown here on card 577 of the 1983 Fleer set. Sample was drafted by Texas in 1973 but didn't sign until being drafted again in 1976. He played for the Rangers from 1978 through 1984. Sample played with the Yankees in 1985 and the Braves in 1986. Since retirement as a player he has worked as a broadcaster, written a movie, and is working on a book.

For some reason I decided to take a chance and ask Mr. Sample for an interview. I received an email from him agreeing to answer some questions. I sent him a list of questions and he was gracious enough to answer them. Here are the questions and answers.

1. What are your memories of the day the Rangers drafted you in 1976?

The more memorable draft day was 1973, it was the year that David Clyde was the first pick in the draft.  Some high school athlete buddies and I were in Myrtle Beach, South Carolina celebrating graduation.  There was Carey Casey (football), Charlie Morgan (basketball), Steve Hammond, Wally Hare and Dave Nave (baseball) and yours truly, (football, baseball, basketball, drama-two plays my junior year, debate J.V., my freshman year, and overall Most Versatile in the class) As impressive as that sounds, at our fortieth class reunion a couple of year ago, Charlie was relentlessly teasing me about my ability to steal the ball from the opposing guard only to blow the layup.  I was the point guard averaging five points per game, he was the shooting guard going to college on scholarship averaging twenty-four points per, thus I had to accept the teasing abuse.  If I drove the lane and you fouled me, you only helped improve my shot.  Anyway, the late, great Rangers' scout, Joe Branzell, tracked me down a couple of days after the draft, (remember there was no MLB.com or MLB Network) I picked up the phone in the hotel room.  "Bill, this is Joe Branzell of the Texas Rangers, we've drafted you in the 28th round."  Now, I knew I wasn't going in the first round, I thought someone in the teens, at least that's what the other scouts were telling me, but the 28th round?  I didn't know they had that many rounds.  Joe could hear my disappointment over the phone and soothed my hurts feelings by saying, "Well Bill, twenty-three other teams passed over you twenty-seven times!"  As if to say, don't blame us for drafting you.  I'm sure that wasn't the first time Joe used that line;  it was funnier in reflection than at the time, but I don't think Joe really expected or wanted me to sign.  I went to Madison College, later, James Madison University under coach Brad Babcock, whose three year old son, Whit, has grown up to be the athletic director at Virginia Tech.  After honing my skills in the Shenandoah Valley League collegiate summer league, I left college after my junior year when Joe drafted me again, this time in the 10th round, and I knew beforehand I would sign regardless of the round and made my way to the Rangers' rookie league in Sarasota, Florida, coached by Assistant Farm Director, Joe Klein.

2. What are your memories of your call-up from the minors and your Major League debut in 1978?

I actually detail some of this in a YouTube clip, about my first hit, and I'm also writing about it in my book that should be finished early in the 2016 baseball season.  I submitted a manuscript to a publisher of a large publishing house about twenty-five years ago.  The publisher said it was good, but the person he answered to said that I didn't have enough name recognition ... whatever ... nowadays it is much easier to publish or self publish and I think my brand is large enough that it will be worth my while, and I do like to express through the written word.  Well, let me leave you with this little tease, we (Danny Darwin, Pat Putnam, Nelson Norman, LaRue Washington, Greg Mahlberg and I)  left Triple-A Tucson in the wee hours of the morning, had a stop in Phoenix, flew to Chicago, changed planes and got to Milwaukee just in time for the last part of the pre-game workout.  I walked into the clubhouse and the lineup card for the Rangers, five games out of first place, had me leading off.  Playing immediately didn't bother me, except it had me playing second base.  I hadn't played second base in a year and a half, and didn't play it well then.  Additionally, I didn't even have an infielders glove.

Here's the link to the YouTube clip Mr. Sample referenced.

3. The Rangers (and others) compared you to Rod Carew when you were a young player. Were you aware of the comparisons? If so, how did they effect your development and the way you view(ed) your career?

Well, the problem was, Dan O'Brien Sr., said those overly flattering remarks about my ability, but Dan was squeezed out of the Rangers' G.M. job and headed towards the Seattle Mariners;  former player, Eddie Robinson, the G.M. negotiating my first contract, was not moved monetarily by the comparison, since he was not the author of it.  I played against Rodney for most of my career and have seen him from time to time afterwards, and I'm not sure if I've ever mentioned the comparison, for fear that he would have to stifle a guffaw laugh in my face.

4. With baseball being so much of a mental game, did your psychology major in college help you in any way during your playing career?

I wish. Honestly, I wasn't a very good Psychology student.  Now, in old age, I can think of five other subject in which I should have majored, although the aforementioned Joe Klein, felt that I could become a good baseball manager because of my psychology background.  I did return to school and got my B.S., which are not only my initials, but, well, you know what B.S. also indicates.

5. You broke your left wrist in 1981 and strained it in 1982. Do you feel those two injuries coming so close together shortened or effected your playing career?

Well, I had a 19 game hitting streak that lasted 115 days in 1981.  Had a 11 game streak, broke my wrist making a diving catch of a U.L. Washington live drive in Arlington.  The light stanchions at the old stadium were so low, that by the time you fought the line drives out of the lights, the ball was closer to the ground than in normal parks, and I caught the liner low and secured it by rolling on my wrist.  I went on the disabled list for the month of May, came back and hit in seven more games leading up to the labor impasse over Free Agent compensation, which lasted fifty more days and I got a single my first at bat back from the strike.  I later re-broke the wrist and played with it broken, the ulna styloid bone, for roughly five weeks until the end of the season without telling anyone associated with the team.  And my declining batting average brought into question the competence of that decision.

6. Who was your most memorable teammate(s)?

I had 195 of them and almost all were memorable in some form or fashion.  I do remember waiting at times for Oscar Gamble to come into the clubhouse in the few months he was a Ranger in 1979, as there was something kinetically enjoyable about his personality.  "Alright, okay, this is it, the big one!"  And he'd finish it with a cackle ... a lively personality and a talented, clutch performer, and how the Rangers lost him during the middle of a pennant run still pains me too much to talk about.  I'd have to pay for more shrink hours ... add to that how they Rangers traded away Dave Righetti and Ron Darling and I will be ready for the Looney Tunes

7. Which manager did you most enjoy playing for?

Well, I think it would have been Billy Hunter had he lasted through the 1978 season.  I had eight managers in a little over eight years.  Don Zimmer told it to me about as straight as it could be told.  It wasn't always what I wanted to hear, but I respected him as almost all of the baseball world respected his personality and love of the game.  Plus, the old Brooklyn Dodger was crazier than the players.

8. Were any of the characters in your movie, Reunion108, based on players you knew?

Hmm, well, most of the stories portrayed in Reunion 108 are composites from my major and minor league days, and some of the roughly fifteen flashback scenes were personal stories, as in Billy Sample lived those stories.  I believe some author said that the 1980 Rangers team was the second best character team of all time.  Who was number one, the Cardinals Gas House Gang?  Anyway, the Rangers and Yankees gave me good fodder for an irreverent baseball clubhouse comedy.  If I had to base my stories on the Braves' clubhouse, I doubt I could have had an award winning screenplay (Hoboken Film Festival 2011)  The personalities were night and day apart.

9. What is the most unusual piece of memorabilia you have ever been asked to sign?

I never got the real sexy places to sign, like on some woman's body.  Someone asked me to sign a football once and I don't think they mistook me for Tony Dorsett

10. How has the game changed (if it has) since you played?

I hate to sound like an old-timer, even though I am, but the remuneration has changed drastically.  My first salary was $21,000, during the double-digit inflation days of the late 1970s, took me three years before I made enough money that I didn't have to find a means of income in the off-season.  Currently, the minimum salary in over $500,000 a year, even if you're taking home only $395,000 after taxes, a living from that can be made.  Stating the after taxes amount of compensation is a lesson I learned from the late Rangers team dentist, Dr. Carl Rainone, who died in a plane crash.  While he was repairing my mouth after losing half of a couple of teeth in a collision on the field, he said in the tone of a person who had investment savvy, "You can't spend gross!"  Thus, I've dealt with net only since then.  Also, in almost all sports, there is a greater correlation between offense and revenue, thus, if you are trying to get the kids' discretionary income dollars, a 10-8 game in a small Cincinnati ballpark with five homers, is more attractive than a pitcher's duel in Los Angeles, and the rules will favor more offense.  In my day, if the two hitters in front of me homered, chances are, the first pitch to me might be around the neck, nowadays, in the same scenario, the pitcher could get immediately ejected.  Offense (and revenues) protected.

Some great answers in there. I will definitely have to give Mr. Sample's book a read when it comes out, seems it will be very interesting. Hope everyone else enjoyed the answers as much as I did. Let me know what you think. Many thanks to Mr. Sample for taking of his time to answer my questions.

How cool is that?!

Good stuff. Thanks for posting. I enjoyed reading it. As a kid my dad bought an Audi from a dealership in Ft. Worth and I remember the sales guy saying Billy Sample had bought one there the day prior. I was about 8 years old, so that stuck with me.