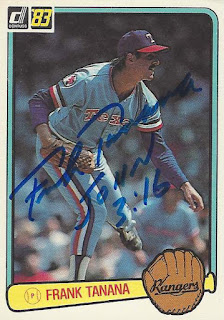 So here we are on Spring Training eve and it's time for one final off-season through the mail return report. Of course, I'll be sending out requests throughout the season but hopefully there will be lots of great Rangers news to talk about.

Sent this 1983 Donruss card and a 1983 Topps card out to former Ranger Frank Tanana on January 20th of this year. Got them both back signed on February 11th. Mr. Tanana included a Gospel tract, as is his practice. Also received returns from former Rangers Dave Schmidt, and Jeff Huson and former Texas draft pick Ritchie Moody this past week. Many thanks to all four of these gentlemen for their consideration in signing and returning my cards. I really need to get some pennies saved up and pick up some more stamps in order to keep the returns coming.

Anyone else been passing the off-season requesting autographs? If so, how did it go?
Posted by Spiff at 9:30 AM

I didn't do any in the off season, but I should! I just mailed a bunch out and will do a post later.


Congrats on those returns!

I didn't send any letters out this winter... I'm running out of guys I remember & have cards of that actually respond.

I did mail seven to spring training camps this week, and have another seven to send next week.

Done sending out Patriots last month, just sent out a handful to Angels at Spring Training. I love getting returns.