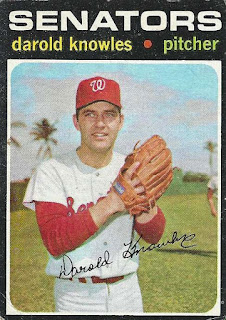 Darold Knowles came to Spring Training in 1971 with the eyes of the Senators front office on him. While there he also got his photograph taken for card 261 of the 1971 Topps set.

The reason the front office was watching Darold closely was because of his confusing 1970 season. Knowles lowered his ERA that year but got hit harder than at any time since he came to Washington prior to the 1967 season.

Apparently the front office had seen what they needed to see from Knowles. Unlike the previous season, his numbers were consistent with each other. Both his ERA and WHIP were climbing. It was time to move him before he had no trade value.

On May 8, 1971 the Senators sent Darold and first baseman Mike Epstein to the Oakland A's in exchange for Frank Fernandez, Paul Lindblad, Don Mincher, and some cash. The trade worked out well for Knowles, he got back in the groove and ended up pitching in the American League Championship Series that fall and again in the World Series in 1973. He would return to Texas prior to 1977 and played one final season with the club before being sold to the Montreal Expos before the 1978 campaign.
Posted by Spiff at 10:13 AM