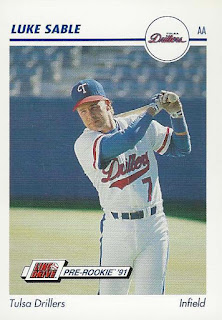 In spite of a rather ordinary season in 1990, Luke Sable was promoted to Double A Tulsa for the 1991 season. Sable's 1991 Line Drive card 595 was a great improvement over his card from the previous season. The Rangers were looking for great improvement from Luke on the field as well.

Although he was primarily a third baseman, Sable continued his versatility in the field with the Drillers. Luke appeared in 75 games at third base, committed 16 errors there, and put up a .925 fielding percentage. He also appeared seven games at second base, and two games each at short stop, in the outfield, and as a pitcher. Sable's tours at second and in the outfield were perfect. He muffed one play at short for a .900 fielding percentage there. Luke was obviously an emergency option on the mound. He pitched just two innings and finished one game. His 36.00 ERA and 4.500 WHIP were predictable for a position player.

Sable made 373 trips to the plate over 95 games for the Drillers in 1991. He improved his batting average almost 20 points to .289 and his on-base percentage stayed about the same at .340. He still didn't have a lot of power: 12 doubles and just seven triples during the season. No home runs. Luke scored 32 runs and bumped in 33 RBI. Unfortunately the hole in his swing was still with him, he struck out 53 times while working only 25 walks.

Luke Sable turned in a serviceable season in 1991 for the Tulsa Drillers. Unfortunately, he needed more than a serviceable season to catch a ticket to Triple A in the Rangers system. Texas was set at third base in 1991 with Dean Palmer. In Deano the club already had a third baseman with a propensity to strike out and defense issues. Of course, Palmer also had a lot of power in his bat and connected for quite a few dingers. Sable needed to get the holes in his defense and bat closed or suddenly develop some eye-catching power or he was going to find himself blocked right out of the Rangers farm system. He would have a chance to make those improvements with Tulsa in 1992.
Posted by Spiff at 10:00 AM