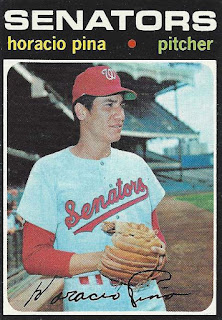 Horacio Pina, seen here on card 497 of the 1971 Topps set, was entering his second season with the Washington Senators in 1971. He performed well in 1970 and Washington was looking for another solid year out of the young hurler.

A reliever, all 56 of Pina's appearances for the Senators in 1971 were out of the bullpen. He was mostly a one-inning guy, tossing only 57.2 innings on the season. He posted a 3.59 ERA (up 80 points from the previous season) and an 1.353 WHIP (down 70 points from the previous season). Horacio was not a power pitcher, as his 38 strikeouts and 31 walks demonstrate. A middle reliever, he notched just two saves and ended the season with a 1-1 record.

The Washington front office had to be a little confused by the dual nature of Pina's pitching stats. He was allowing fewer runners on base but was giving up more runs. It was hard to say exactly what that split meant. Horacio would make the move to Texas with the team but the powers that be would be keeping an eye on him in 1973.
Posted by Spiff at 10:30 AM