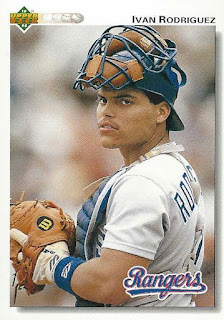 The boys are back! Pitchers and catchers report today! Baseball has returned and the world is a better place.

Former Rangers catcher Ivan Rodriguez, shown here on 1990 Upper Deck card 245, is one of the special instructors working with Rangers catchers this spring. Hopefully some of his talent will rub off. Catching seems to be a weak area in Arlington at the moment.

Texas heads into Spring Training this year with several interesting story lines to follow. Of course, everyone is waiting to see if Yu Darvish will be able to make a complete comeback from his Tommy John Surgery. The answer to that will have to wait until later in the year though since Darvish is not expected back in the rotation until May. As such, the team finds a need for somebody to hold down Darvish's spot in the rotation. That competition is wide open.

The composition of the bullpen is also far from set. There are a number of arms looking for a spot in the Texas pen but a final decision on who's in and who's out is likely to wait until the final few days before the start of the season.

For the most part, the starting lineup is set and nobody is really expecting huge roster battles in that area. There is room for surprises however. Rougned Odor and Delino DeShields had good seasons last year. Both are young though and have not yet completely nailed down their starting jobs. Odor could face a challenge from a finally healthy, and still unproven, Jurickson Profar. Outfield prospects Lewis Brinson and Nomar Mazara could also mount challenges if DeShields shows any weakness or if Josh Hamilton turns out to be less than healthy. Of course, Joey Gallo is always lurking in the wings as well.

The Rangers are also hoping to extend third baseman Adrian Beltre's contract for at least another year before the team breaks camp. 2016 is the final year of Adrian's contract and Texas would like to keep him at the hot corner. Apparently Beltre is open to the possibility but with Scott Boras involved there is no way to tell if the two sides can reach an agreement.

However these various stories work out, I think we can all reach an agreement that it is very good to have baseball, and the boys of summer, back.
Posted by Spiff at 10:00 AM