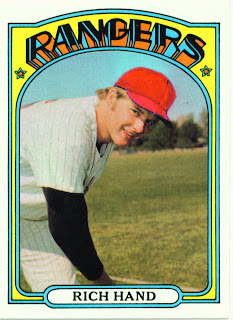 There were three Rangers who were on the skids but seemed to snap out of it and contribute to last night's win over Baltimore. Unfortunately I don't have any Topps cards that I haven't already posted of David Murphy and none at all of Matt Harrison and Taylor Teagarden.

As a stand in I give you this 1972 Topps card of Rich Hand, number 317 in the set. There is no link between Rich and the three players listed above, he was just the next card up in the '72 Topps team set.

Rich sure looks happy on this card. He was probably thrilled to be back in the Majors after finishing the 1971 campaign in Triple A for Cleveland. After being traded to Texas, Rich would pitch part of two seasons with them. He would split the 1972 season between the Rangers and Triple A and would be traded to the Angels in May of 1973. Included in the trade was catcher Rick Stelmaszek.

1973 would be Rich's last season in the Big Leagues. He would spend 1972 in the minors as he bounced between The Angels and Red Sox and would be sent to St. Louis at the end of the season. That would be it for Rich's playing career.
Posted by Spiff at 1:08 PM

I always applaud a Stelmaszek reference.

Threw that in there just for you Johngy. Figured you might appreciate it.