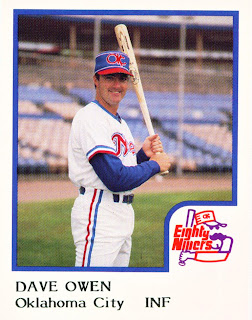 Last night was an off day for the Rangers and tonight they play the Royals. Normally I would be pleased with that but I am working third shift and so will probably be asleep during most of the game. Rats.

With the lull in games, I thought today might be a good day to take a look at another minor league card. This is Dave Owen's card from the 1986 ProCards team set of the Eighty Niners. The set was unnumbered.

Dave never appeared in a major league uniform while with the Rangers during his season and a half with the organization.

He did play in the big show for the Cubs and Royals though. The height of his career was in 1984 when he appeared in 47 games for the Cubs. He had played for them in 1983 and would again in 1985 but 1984 was the most action he would see in the majors. Three years after his last Cubs appearance, a couple of trades, and a free agency Dave appeared in seven games for the Royals. He was granted free agency in October of 1988. After that he played one more year in the minors with the Cubs organization before disappearing from view.
Posted by Spiff at 7:19 AM

I am surprised his career did not last longer as a utility guy. Still, he made it and pretty cool to be mlb brothers.

I don't know how I missed the Spike Owen connection. Guess I was just asleep at the switch. I could have included that Spike and my Dad both graduated from Cleburne High School within a year or two of each other.