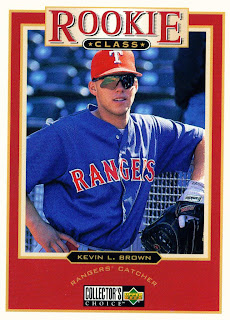 Received a nice package today from Tim in Ohio. As per an earlier agreement, Tim sent me about 70 Rangers and I shipped him roughly the same number of Indians and Expos. Actually, the package I sent was rather light on Indians. Sorry about that Tim, I'll make it right next time.

Anyway, on to the package. I needed several of the cards that Tim sent. One that I needed was this 1997 Collector's Choice Kevin L. Brown, number 12 in the set. This card helped push me closer to completing the team set from that year.

Also included in the package were some Topps Stickers from 1989 that I needed and a couple of Ivan Rodriguez cards that I already had in my Pudge collection but needed for my team sets. Great trade Tim! Thanks a bunch!

Had I not gotten the trade in from Tim, this would have been yet another Michael Young post. Mike hit a two run homer in the ninth inning in Baltimore today to win the game for Texas. That is the third time this week that he has hit a ninth inning home run to either tie the game or put the Rangers ahead. The guy is just tearing it up right now. Hopefully he can keep it up until the rest of the team catches up.
Posted by Spiff at 9:24 PM

Glad to hear you enjoyed the trade, and I would be happy to make more trades with you in the future. Happy collecting! Tim