Player of the Week. 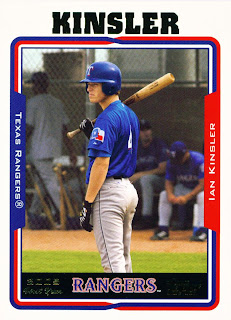 Ian Kinsler, seen here on card number 302 of the 2005 Topps set, was named co-A.L. Player of the Week yesterday. The honor applies to last week and was presented by Bank of America. Kinsler was named because of his tremendous offensive week. His co-winner was Zack Greinke of the Kansas City Royals who was named for his defensive work at keeping his opponents from hitting. Kind of an ironic pairing.

In other Rangers news:
Kris Benson has some tendinitis in his elbow and will be pushed back in his next start.

Nolan Ryan says that he thinks Ron Washington is doing a fine job as manager. Jon Daniels concurs and says there has been no talk of replacing him. These comments come in response to fans and writers already in panic mode.

The club is keeping an eye on Vicente Padilla. Padilla has been struggling this season and his velocity is apparently dropping. His ERA is currently at 9.64. Not good.

The bullpen is a concern. The combined ERA is 7.68 and heads have already started to roll with two pitchers being sent down so far. They got to do something about that if they want to get this season going right. Wilson, Francisco, and Jennings are doing well so there is at least a base to build on.
Posted by Spiff at 7:46 AM

Where the picture of Grienke?

Thanks for commenting. I always appreciate reader feedback.