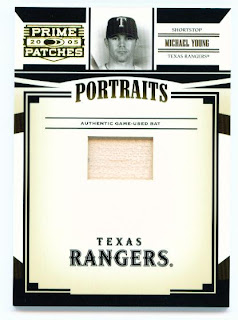 This is not a Michael Young blog. Having said that, it is a good thing that I have a large supply of Mike's cards. Seems like he is filling Josh Hamilton's role this year. He always seems to be one of the guys lifting the team at the crucial moments. Last night it was a ninth inning home run to put the Rangers back in the game they eventually lost 8-7 in the eleventh.

Today we see him on card number P-21 of the 2005 Prime Patches set. This card is numbered 72/100 and has a piece of Michael's bat in it. This is a set that was way too expensive for me to buy when it came out but that I have gotten quite addicted to on the secondary market. I still don't completely understand the structure of the set but they just grabbed me for some reason.

Young's homer wasn't the only highlight last night in Toronto. Much hyped pitching prospect Derek Holland made his Major League debut in the sixth inning. He went 2.1 innings, gave up three hits, no runs, and got two strikeouts. Sounds good but it's still way to early to draw any solid conclusions about this kid.

Pitcher Kris Benson went on the DL prior to the game. Scott Feldman will be moving to the starting rotation to replace him. To replace Feldman in the pen the Rangers claimed Darren O'Day off waivers from the Mets. He was told to join the team in Toronto and arrived at the park in the tenth inning. Texas was running low on relievers so they tossed him in to see what he could do. He made his appearance wearing Jason Gabbard's jersey since they didn't have one for him yet. He then promptly gave up a hit that allowed the winning run to score. Weird arrival to be sure.
Posted by Spiff at 11:25 AM